Litebook as effective as prozac for SAD sufferers

Why do many people feel depressed as the nights get longer and what can we do about it?

It is all about Melatonin

Melatonin production increases as light intensity falls and it is responsible for inducing sleep. Clearly Melatonin, as the sleep inducing, hormone, slows us down making us less alert and depresses our mood. Anybody who wakes up at 4 o’clock am will testify that this is not the happiest time to wake up. Melatonin production is stimulated by low exposure to sunlight.

Sunlight has the reverse effect, it suppresses the production of Melatonin which is produced from the feel good hormone, Serotonin. Thus, exposure to Sunlight results in increased Serotonin levels and reduced Melotonin levels. We all know how much better we feel when the sun is shining.

The problem for those of us living in Northern latitudes, is that we go to work in dark, grey, drizzly weather, sit in the office all day, well away from the sunlight and then return home at night. Little wonder then, that many of us suffer from the winter blues or seasonal affective disorder (SAD).

So what is the solution?


Light Therapy
Light therapy first became an option for the treatment of seasonal onset depression (SAD) following the discovery in 1971 that very bright light could influence the control of the hormone melatonin.
40% of the population suffers from SAD usually defined as winter blues.

Light deprivation symptoms are also experienced by those who live in conflict with their body clock such as night workers, shift workers and international travellers (jet lag). For physiological reasons the body clock is also shifted at two key life stages. It moves forward by 4 – 6 hours at puberty meaning that teenagers and students do not feel sleepy until the early hours and cannot wake before noon, Later on in life the body clock shifts back leading to poor sleep patterns and a tendency to wake in the very early hours.
Research in the last few years has also confirmed that melatonin suppression is under the control of very specific wavelengths of light. 460-470nm at the non-visible blue end of the spectrum activates melatonin and green light at 540nm resets the receptor. Bright sunlight peaks at 470nm with a second smaller peak at 540nm.

Bright White light therapy works but has a few pitfalls. SAD lights can be very expensive, very bulky, very bright and not portable. Although in theory they should work, in practice does exposure to them give the user sufficient exposure to the right wavelengths that trigger Melatonin suppression?

Litebook™
These questions have been answered by one particular manufacturer, who has “put their money where their mouth is”. The manufacturers of Litebook have done several very well conducted clinical trials on their product where the Litebook has been shown to be better than placebo and as effective as Fluoxetine (Prozac) for the treatment of Seasonal Affective Disorder (SAD). (Am J Psychiatry 2006; 163:805-812) but with a lower incidence of adverse events.

The white light LED used in the Litebook produces light in a narrow range that peaks at 470nm with a second peak at 540nm, thus mimicking bright sunlight but without creating a very bright glare. The Litebook white light LEDs are totally free of ultra violet light and are therefore safe for long term use.
The other huge advantage of using these special LEDs is that they do not require large amounts of energy to make them work, thus they can be powered by rechargeable batteries making for a very portable system. The trials also indicate that only 15 to 30 minutes per day exposure is required in contrast to other SAD lamps which require all day exposure. The price of the Litebooks, while not cheap, is still reasonable by comparison with most other SAD lamps and those SAD lamps which are cheaper remain to be proven effective. 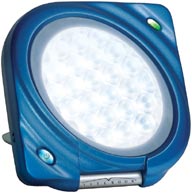 The Litebook™
The stylish, new compact design is ultra-light weight. Each of the 24 bright white light LEDs each with individual Fresnel lens to focus beam and a diffuser to reduce glare. The Rechargeable Lithium ION Battery gives 2 hours use per charge and there is an inbuilt battery level indicator. A timer function stores 15, 30, 45 or 60 minute treatment times.
The Litebook comes complete with a smart black carry case and Mains Adaptor.
A Worldwide AC mains adaptor (US/Europe/Australia/UK) makes the Litebook perfect for jet lag applications.

For further information just click on this link and http://www.naturalfigure.co.uk/ they will send you the full Litebook information pack.
RRP £149.99 inclusive of VAT or £127.65 excluding VAT
Posted by The Detox Team at 9:03 AM